An adventure playground for divers.

Aeroplanes, helicopters, boats and more…
All waiting to be discovered by you.

A visit to this commercial dive centre makes a change from our usual diet of sea lochs, marine life and the natural world. This time, it’s all inland, freshwater and man-made, but there are fish and it’s still fun. It’s also good for navigation practice, with no currents or tides to contend with.

For navigation, you can download and laminate our Capernwray dive map >

On Google Maps >
On Google StreetView >

Capernwray is located conveniently close to Junction 35 on the M6 motorway.

Head south on the M74, then continue onto the M6 for a further 68.8 miles. At Junction 35, take the A601(M) exit signposted Carnforth. At the roundabout, take the first exit A601(M). After 0.4 miles, turn left and follow B6254. After 0.7 miles, turn left onto Capernwray road. After a short distance, turn left to stay on Capernwray Road. Continue for 1.1 miles and Capernwray Dive Centre will be on your right-hand side. Follow whatever traffic management they have in place to enter the site and park.

About the Dive Centre…

The Capernwray Diving Centre, in the north of England, opened in 1995 on the site of a former limestone quarry. It provides an interesting fresh water alternative for those divers who are more used to the delights of Scottish sea lochs, coastlines and wrecks. Its situation makes it a realistic option for a one-day outing, and the wide variety of features placed in the water, together with the inquisitive resident fish population make a visit worthwhile.

What’s there to see

Transport of one sort or another seems to be the general theme, ranging from the sunken wrecks of various small boats, including a harbour minesweeper, to some more unusual stuff – a light plane, a couple of helicopters, and the most recent sinking – a Hawker Siddeley 748 50-seater passenger aeroplane from a defunct airline. And for those who prefer creatures to craft, the fishy population includes trout, perch, roach, pike and sturgeon – and some of them are massive.

Capernwray has been well laid out to cater for all diving abilities. It has alternative access points from slipway, or jetty and there are numerous objects to discover at the various depths, which are stepped at 5,10, 15 and 20 metre intervals, with shallower training platforms. 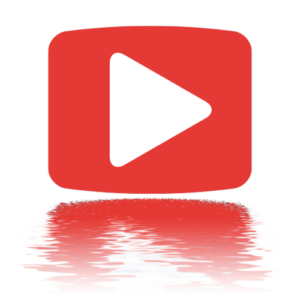 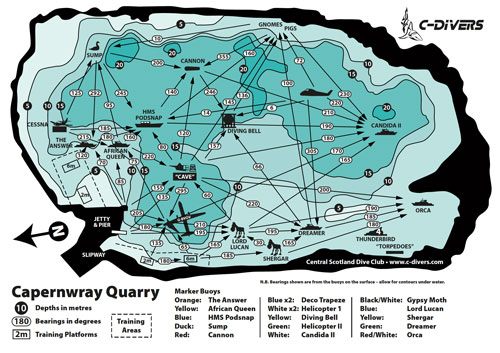 (Then laminate it, and take it with you.)

Our club’s Capernwray Dive Plan, originally produced by us for our members on a visit there in 2010 has now been widely “borrowed” and rebranded by numerous other divers – as well as Capernwray Dive Centre themselves, who may still have a bootleg version of it for sale in their shop!

There’s no need to buy one, when you can download it from C-Divers for free. 🙂

Interestingly, out of the hundreds of Capernwray Map downloads over the past eleven years, only two folk have ever bothered to say “thanks”. It’s okay, you don’t need to, but it doesn’t go unappreciated.

Happy and safe diving from C-Divers!